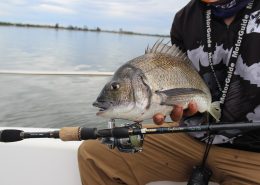 We are very excited to announce that Frogleys Offshore are onboard for this year’s Gold Coast Flathead Classic as Gold Sponsors.

Talking with the team at Frogleys they announced;

“We are very excited to be involved with the premiere flathead competition in Australia. This is certainly one of Australia’s most loved fishing events evidenced by the return patronage and reputation both locally and nationally”.

Talking a little about how the companies heritage, Frogleys Offshore is an Australian owned and operated family business originally founded in 1981 by Jeff Frogley and trading as “Jeff Frogley Agencies”.

The business was and still is the national distributor of Fuji Rod Building Components, the worlds foremost manufacturer of quality rod building componentry.

Under Jeff’s stewardship, the business quickly became Australia’s largest supplier of all types of rod building equipment including guides, grips, threads and resins.

In 1998 the business was acquired by Paul Starkey and Pat Rummery. At that time Rod manufacture in Australia was undergoing rapid change with most of the manufacturing going offshore.

Seeing the need to diversify Paul and Pat acquired “Offshore Sports” which had as its main business the distribution of Gamakatsu fishing hooks in Australia. This acquisition allowed two of the most respected Japanese companies to come together for distribution purposes in Australia.

Shortly after this Paul and his eldest son Michael acquired Pats interest in the business allowing the business to be solely owned and operated by the Starkey family.

Following the acquisition of the distribution rights to Gamakatsu fishing hooks in Australia, the business has traded as Frogleys Offshore and now proudly distributes and represents some of the most reputable brand names in the fishing industry worldwide.

• Fuji – The Worlds finest components
• Gamakatsu – The worlds No1 selling hook
• Atomic – Australian brand which includes rods, lures, jig head just to name a few
• Majorcraft – Japans largest selling lure rod
• Bassday – high quality Japanese lures
• Samurai – quality fishing rods used by the best anglers in the country
• Kershaw – fishing and outdoor knivesEach brand represented is a proven performer and these brands are all leaders in their respective fields. The business operates out of its own premises at Ballina in Northern NSW with Michael guiding its growth.

The company remains at the forefront of fishing in Australia and has introduced and will continue to introduce innovative products to keep thousands of Australian fishermen ahead of the game.